Sanad Human Right Organisation is following with concern the Turkish Criminal Court’s decision today, Thursday, 7 April 2022, to suspends trial of 26 Saudis accused in the gruesome killing of Washington Post columnist Jamal Khashoggi in the Saudi consulate in Istanbul in October 2018.

Last week, the Turkish Public Prosecutor asked the court to suspend the trials of the accused and for the case to be transferred to Saudi Arabia. On Thursday, a Turkish court ruled to suspend the trials in absentia of the 26 Saudi suspects and transfer the case to Saudi Arabia, raising fears of impunity for a crime that sparked international outrage.

Sanad strongly condemns this political move that sacrifices justice and human rights for resolving Turkey’s tensions with regional countries. Such unlawful step will greatly contribute to blurring the features of this horrendous crime, and consequently promotes injustice, perpetuate violations, and encourages impunity at the expense of justice, integrity, fairness, and accountability.

Istanbul court’s shameful decision comes despite numerous warnings that it will only lead to a cover up of the heinous crime, especially since the vastly politicised Saudi criminal justice system lacks credibility and fails to satisfy basic standards of transparency, judicial independence, and fairness.

The involvement of several prominent Saudi officials in Khashoggi’s murder case certainly abolishes any possibility that Saudi authorities would hold a fair trial and ascertains the fears that the regime will cover up the perpetrators, completely bury the case and deny victims the justice they deserve. It is also proven that the sham trial that Saudi regime had held over Khashoggi’s murder is legally and criminally incorrect, and thus, there is no reason to expect different outcomes in any future trials over the same case.

Sanad calls on the international community to carry out its responsibility and push for a credible and transparent trial on Khashoggi’s murder, to hold accountable all those accused and involved in the murder, without exceptions. The international community should not allow this case to be demolished by political expediency or allow political interference to derail justice, which will only induce more heinous transnational crimes and encourage impunity. 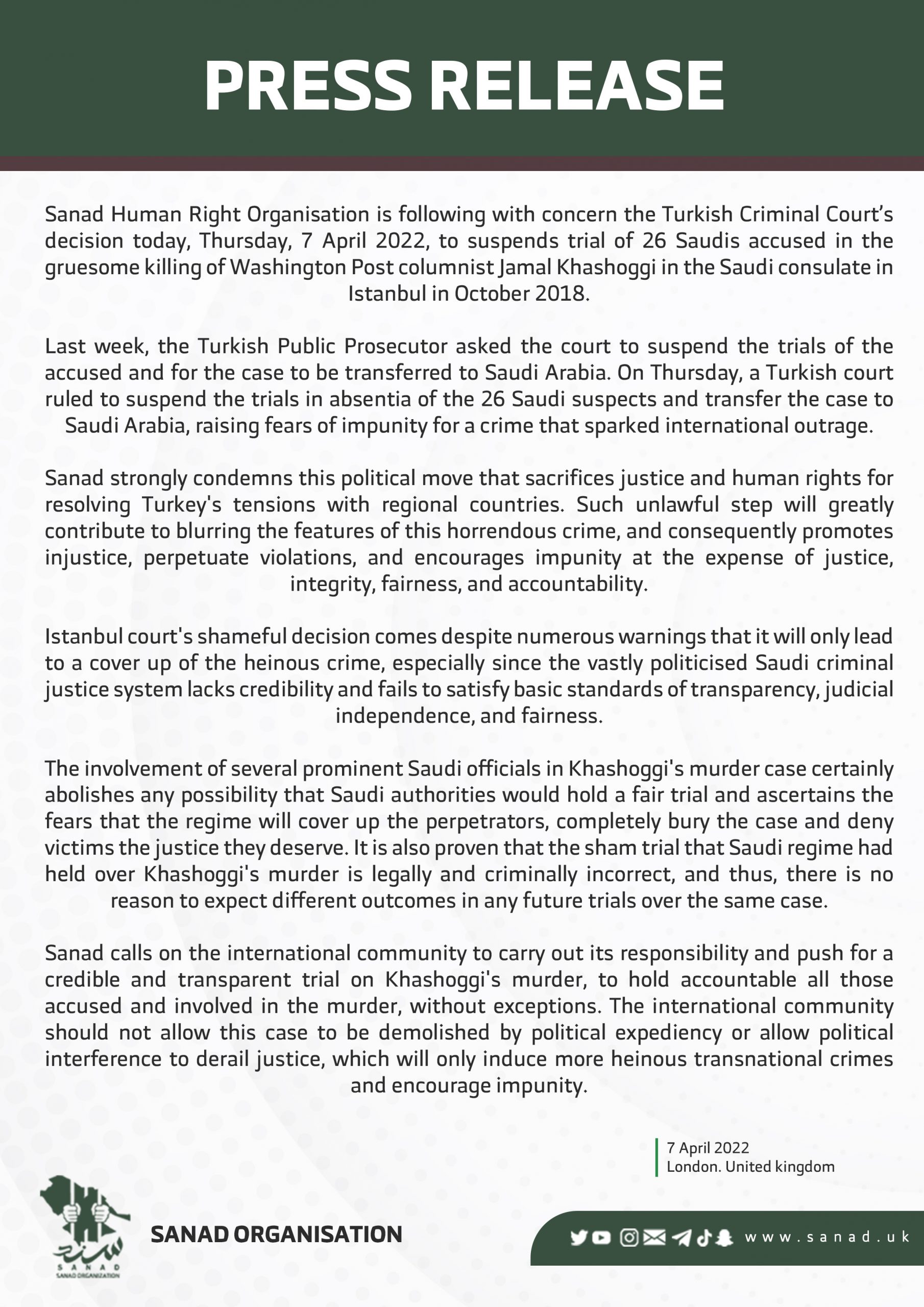